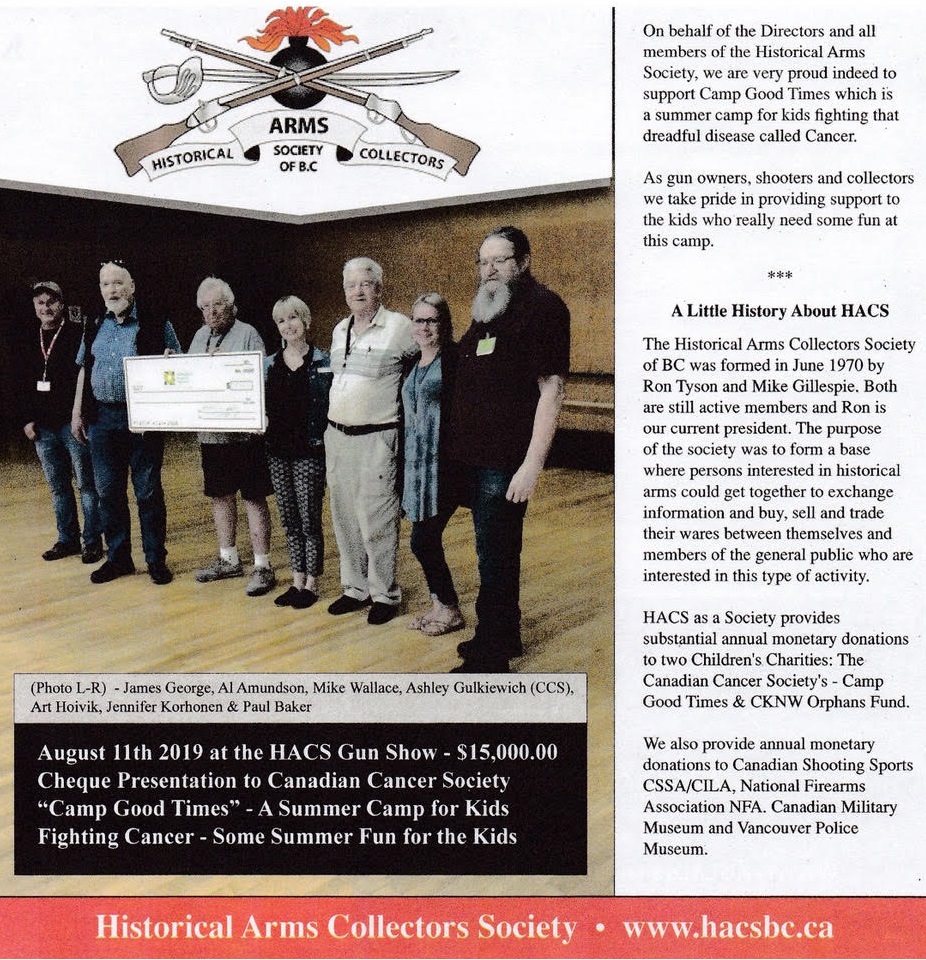 Ron Tyson was one of the founding members of HACS 50 years ago in 1970.  He organized and set up the shows in Vancouver, Burnaby and Coquitlam.  He had help of course but no one worked harder than Ron.  It was a major social part of his lifestyle.  His wife traveled with him to Gun Shows across Canada and the US.  Ron has served as our President for many years now.  When we had to leave Burnaby the shows were re-located to Chilliwack where we have enjoyed several years of successful gun shows.  In appreciation for all he has done for HACS he was presented with a wall plaque of Recognition for his Service to HACS.  We intended to present the plaque at the AGM at the March show but Covid-19 struck.  Ron had tables at the Hunting & Fishing show at the Armories Hall on Princess Avenue in Chilliwack on July 11th.  I saw him there in the early morning.  He told me his last show will be at the Armories Hall in Chilliwack in Sept.  He is retiring.  I went home, got the plaque and presented it in the afternoon.  You can see how surprised and pleased he was by the photos, courtesy of Bryan Gagne.  I wanted to do the presentation at a gun show with some of his peers present.  It worked out well.

On July 6th 2017 at our HACS Gun Show at Evergreen Hall in Chilliwack, BC a cheque in the amount of $20,000 dollars was presented by HACS Treasurer Mike Wallace to Winnie and Ashley of the Canadian Cancer Society’s Camp Good Times.

On behalf of the Directors and all members of the Historical Arms Society we are very proud indeed to support Camp Good Times which is a summer camp for kids fighting that dreadful disease called Cancer. As gun owners, shooters and collectors we take pride in providing support to the kids who really need some fun at this camp. During the last 10 years HACS has donated a total of $102,000 dollars to Camp Good Times.

Our Sgt. at Arms Al Amundson contacted Winnie and arranged for the presentation to take place at Evergreen Hall in Chilliwack during the Gun Show. Winnie told Al the money this year will be used to purchase a couple of new golf carts to move the children around the camp who have difficulty walking.

Evergreen Hall has proven to be a great place for our monthly shows. The City of Chilliwack has treated us very well. The hall is well lit and just right for our Sunday shows. The Mount Cheam Lions Club have been doing a great job in keeping us well fed with hot coffee and good food.

January 2015:
First show in Chilliwack. Over 75 tables of enthusiastic vendors and their merchandise.